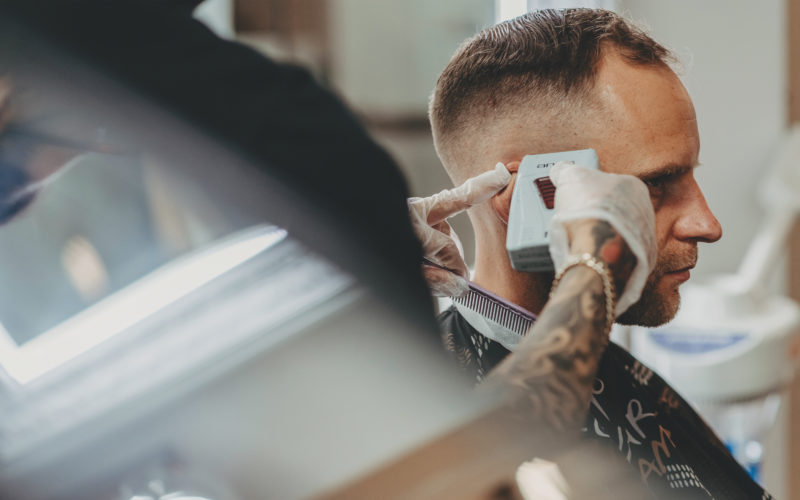 As more men embrace luxurious self-care, barbershops across the country are stepping up the glamour.

As we all try to leave toxic masculinity behind us, more and more men are taking the time to look after their well-being, and the industry is responding. The men’s personal care market is booming, with global forecasts predicting it will grow by over $100 billion over the next 10 years. Canadian men of all orientations are no exception; they are increasingly looking for chic specialty spaces for a bit of TLC. To deliver those perfect fades and expert beard cuts – often with a cappuccino or a glass of scotch – a growing number of high-design Canadian barbershops offering more than the classic level of shaving and haircutting service have stepped up. installed.

In Montreal, Leandro Vergara flipped the script on the barbershop concept when he launched Maison Privée in 2015. “something good for men,” he says. For its location in the Old Port, his vision was for a crisp, bright all-white space—something completely different from the more traditional Canadian hair salons outfitted in wood and leather. The only color in the airy space of the boutique – where the stunning 5.5-meter-high, 200-year-old plaster ceiling steals the show – comes from a display of cool greenery. Fulfilling the wow factor? The impressive custom-built mirror framed by Insta-friendly LED lighting in front of each chair.

Vergara’s instincts, of course, were on board: demand for high-end Canadian barbershops grew, so much so that he opened four more locations in the city. Like someone who started cutting hair in his mother’s basement when he was 16, Vergara, now 29, has seen firsthand how men’s attitudes towards self-care have evolved. “Guys used to cut their own hair, or if they had another style in mind, they would go to a women’s hairdresser,” he says. “There’s nothing wrong with going to a typical salon, but most men benefit from the specific expertise of a professional barber.”

“At first people were intimidated by our concept, but then they came in and saw how hot it was and remembered that the reception staff remembered them every time they entered,” says Ju Tenuta , the manager of Regal Grooming Salon. Located in downtown Vancouver, the 167 square meter space is adorned with dark wood paneled walls and plush black leather barber chairs. Besides the haircuts, Regal’s express facial is one of the most booked services, as are the relaxing hot towel shaves.

The men’s grooming landscape has changed a lot since Regal opened in 2017, Tenuta says. “Back then, customers didn’t ask what other services we offer, but now they want to be pampered. The guys happily sip free cocktails on their dates and use the shoe shine service, cologne bar and selfie station (with a feature wall and flattering lighting) before stepping out with some more of bluster.

Like Vergara at Maison Privée, Tony Sadiku also wanted to change the barbershop experience. “People don’t give barbers a lot of credit,” says Sadiku, owner of Dundas Square Barbers in Toronto. He just needed the right location and the perfect design to make his dream of a welcoming high-end store a reality. So he waited six years to land the perfect space in Yonge-Dundas Square in 2021. The New York native had long set his sights on this bustling area of ​​the CF Toronto Eaton Center because it reminded him of Times Square.

Custom ombré wallpaper, a rose-hued marble cafe bar, ornate plaster moldings, and gold fringed sconces complete the welcoming room. And it didn’t go unnoticed: Sadiku swears that every customer takes a picture while on duty – no designated selfie station required. “The space provides a nice backdrop for people to take pictures – to mark their memory,” says Samer Shaath, one half of the design duo behind Nivek Remas. “The hair salon is no longer just about service; it’s a totally cohesive and immersive experience.