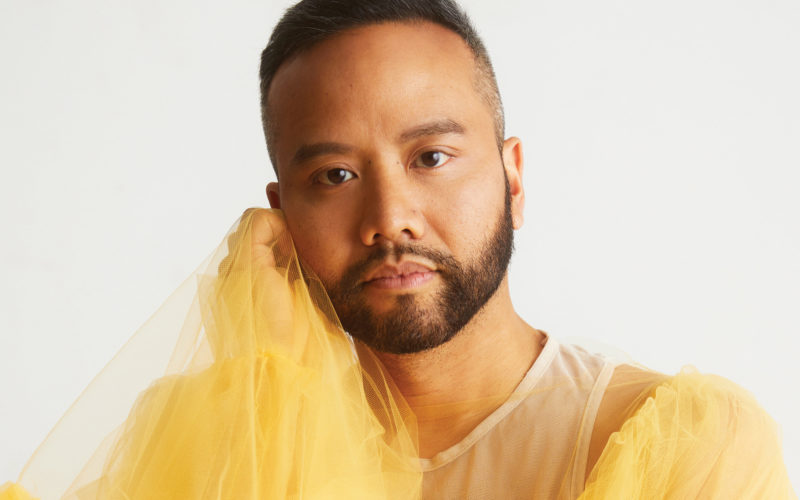 Photograph by BY MAY TRUONG

He paints the city red (and all the other shades of the rainbow).

Like so many others on the path to discovering their creative purpose, Armand Digdoyo, it seems, has already lived many lifetimes. Growing up in Ottawa after his parents emigrated from Jakarta, he eventually moved to Montreal to explore city life as a club kid and help local fashion designer Lino Catalano before finally landing in Toronto. Over the past 18 years, he has continued to try on many hats in an effort to make the most of his creative flair. He was a member of the electro-dance group Fritz Helder & The Phantoms (which opened for Lady Gaga in New York and was a mentee of Nelly Furtado), a columnist for Fabulous magazine, DJ for the Canadian Opera Company and Holt Renfrew, and sound designer and stylist for brands like Aveda, Deveaux New York, and Greta Constantine. He also founded New Ho Queen to support local Asians identifying with LGBTQIA2S+ in the face of racist hate crimes.

Six years ago, her experiences in fashion, music and entertainment intersected in a way that feels like the dots in life are finally connecting. With friend and fellow DJ Phil Villeneuve, he co-founded Yohomo – a hub and safe space for the LGBTQIA2S+ community to come together and share information about pre-approved arts, culture and nightlife events. “Yomomo came from the #nohomo trending hashtag on Twitter at some point,” Digdoyo explains. “We wanted to take it back and turn something so homophobic into something positive.”

Digdoyo and Villeneuve have since embarked on the production of their own Yohomo events, podcast and curated playlists as well as a collaboration with Spotify during Pride, which landed them on a billboard in the middle of Yonge-Dundas Square. They’ve also introduced a line of custom Yohomo merchandise, often designed in partnership with local artists, including t-shirts, sweatshirts and reusable grocery bags, which they print in limited batches in Toronto and ship free. labels in compostable envelopes to avoid as much waste as possible. Expanding the Yohomo model beyond events has also helped them maintain party and community support virtually during the pandemic. “I think these queer experiences that turn into art really need to be showcased, not least because of the mindfulness they create,” says Digdoyo. “It inspires young people to know that they can thrive.” During the initial lockdown of 2020, they collaborated with designer Tim Singleton and donated five dollars from the sale of each shirt to The 519 – a leading center for LGBTQIA2S+ support and activism in downtown Toronto. Since then, they have continued to fundraise for several community groups, including LGBT Youthline, Pieces to Pathways and FoodShare.

As with many of us, Digdoyo’s goal with makeup is simply to present the best possible version of himself. It’s a must, he says, to look more polished for special events, as seen in the mandatory snapshot and IG Live. “I will be 40 this year, so I want to feel a bit younger and well rested.” To achieve this, a well-placed dab of MAC Studio Finish SPF 35 Concealer and Charlotte Tilbury Airbrush Flawless Finish Setting Powder and filled-in brows go a long way. “I try not to go too dark with my eyebrows because I want to keep them in balance with my beard,” he adds.

Digdoyo says that after experimenting so much with dynamic drag-inspired looks when he was a member of Fritz Helder & The Phantoms, he went through a phase where he wanted to keep his looks as streamlined as possible. However, the restrictions and isolation of the past two years have inspired him to bring back some of those styles and techniques, such as dramatic lashes and other facial embellishments, in a bid to have more fun and take it all a bit. less seriously. Digdoyo particularly appreciates how social media and beauty influencers have made various beauty looks more accessible to everyone, regardless of gender norms. “You can play how you feel and you don’t have to box yourself,” he says. “It’s really encouraging to see how non-binary and trans people are expressing themselves while achieving so much success.”

One influencer who was a particular inspiration is Bretman’s Rock, a Filipino-American living in Hawaii who posts beauty and lifestyle videos to her more than 18 million Instagram followers and nearly nine million YouTube subscribers. After friend and fashion photographer Tommy Ton pointed out Rock, Digdoyo admitted he had become addicted to the influencer’s authentic point of view and how he uniquely represents fashion-loving queer culture. and beauty. “I wish I had seen someone like that when I was growing up as an Asian gay kid. Maybe I wouldn’t have put so many restrictions and insecurities on myself when it came to how I looked or how I dressed or the way I felt I had to present myself as a queer person.

While Digdoyo’s mother’s love of fashion and beauty was an early source of encouragement for her own passions, growing up in a Muslim family also helped inform her perspective on building safe spaces. and the encouragement of all forms of expression and representation. “It helped me to know what it is like to be an outsider in a group of outsiders and allowed me to be aware of how people can feel marginalized at different intersections “says Digdoyo. “It definitely affected my desire to create a community where I don’t see it because I know how hard it can be to feel unincluded and unseen.”